Lora Blevins farmstead is a throwback to a simpler era 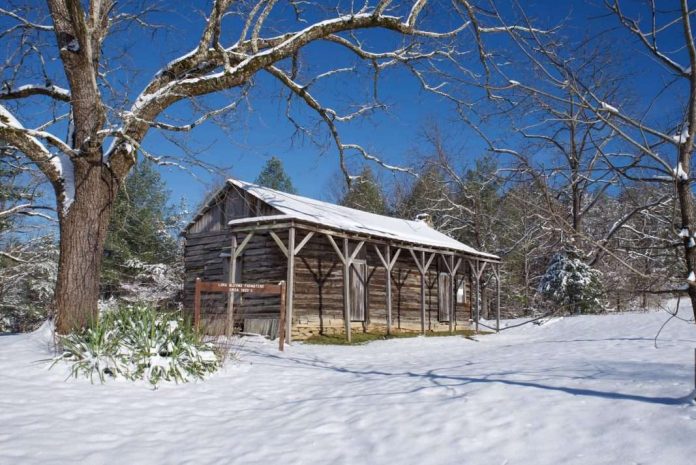 Located just north of Bandy Creek, and right on the “main road,” is the Lora Blevins farmstead — a well-preserved early 20th century homeplace that represents how the Big South Fork region’s subsistence farmers once lived.

The Lora Blevins Farm is one of only four farmsteads in the Big South Fork that are preserved. Three of those are in the vicinity of Bandy Creek, the other two being the John Litton Farm and the Oscar Blevins Farm. (The fourth is Charit Creek Lodge, deep in the BSF backcountry.)

You can’t go inside Lora Blevins’ cabin; it’s boarded up for safety and management reasons. But you can explore around outside, checking out the structure of the old cabin, as well as the various outbuildings that are still in place — including a barn and corn crib. The fields where the Blevins family once grew their crops are still cleared; each year, the National Park Service uses this old farmstead as a centerpiece to its Spring Planting Festival, which will be held this year on April 23. There’s a large cemetery on the farm, as well.

Rev. Lora Elzick Blevins was born on March 25, 1896, the son of Shadrack “Shade” Blevins and Polly Ann Crabtree. He married Tealie Ann Slaven — the daughter of Charley Slaven and Sally Ann Roysdon — in July 1915, when he was 19 and she was 18. He was a Baptist minister for 60 years, preaching at many of the small rural churches throughout the region.

The Blevins family’s roots go back to the very beginning of white settlement in the Big South Fork region. Rev. Lora Blevins’ grandfather was Armstead Blevins, and his great-grandfather was Jonathan Blevins, who settled on Station Camp Creek around 1815 as one of the first white settlers in the region.

Oscar Blevins, who owned the farm just down the road from Lora and Tealie, was a cousin. He was the son of Jake and Viannah Blevins. Jonathan Blevins was also his great-grandfather, making Oscar and Lora second cousins. Oscar’s grandfather was Jacob Blevins, a brother to Armstead Blevins.

History of the farm

In 1927, Lora and Tealie purchased 45 acres from Oliver and Lucy Delk and established their farm. They had nine children, though only seven survived to adulthood. They had five five surviving children when they established their farm. The youngest, Poppie, was a newborn baby. She was also the longest-living of the Blevins children, dying in 2012. Three more children were born at the farm: Lola Ellen, born in 1929, died at the age of 19 months and is buried in the cemetery on the farm. Idra Orange was born in 1932, and Janie Ruth was born in 1939.

The Blevins family utilized all of the 45 acres they owned. Most of it was converted to fields, which were plowed with a mule each spring. They used hand-hewn timbers from the trees on the property to build their cabin — which was constructed in 1928 — and barn, and they got their water from a spring a little ways to the north. There was an orchard on the northwest corner of the farm, and another to the south, on the opposite side of what is now West Bandy Creek Road. (Interesting note: in the 1920s, this road was the main route between Oneida and Jamestown.)

Poppie Blevins Dishman once said, in an oral interview with the NPS, “There was lots of love in this house.” She and the other Blevins children slept upstairs in the cabin, and she later recalled that snow would blow in and cover them as they slept on cold winter nights.

If you park your vehicle and venture out onto the old farm, you can find traces of the old hedgerows, fences and roads that were a part of the farm, as well as the fruit and nut trees from which the Blevins family gathered food. Sadly, many of the farm’s structures were destroyed after the property was acquired by the U.S. Army Corps of Engineers. Among those structures that did not survive were a springhouse, a blacksmith shop, a smokehouse, chicken coop and hog pen. There was also a tobacco barn, which doubled as a church.

The cemetery — the Katie Blevins Cemetery — far predates the farm itself. It was established in the 1860s. Interestingly, all of those who lived on the farms in the vicinity of Bandy Creek that remain preserved today — Lora and Tealie Blevins, Oscar and Martha Blevins, and John and Elvira Litton — are buried in the cemetery.

The beginning of the end

In 1969, Tealie died. She was buried in the cemetery on the farm. That same year, Lora remarried to Eva Coffey, the daughter of Coleman and Rosie Burke Coffey. But they soon moved away from the farm, selling most of it to two of Lora’s sons — Leonard and George Blevins. Eva died in 1978, and Lora remarried again to Louise Terry, the daughter of Lawrence Terry and Flossie Smith.

The Blevins farm continued to be active until 1980, when the Army Corps of Engineers purchased it for inclusion in the Big South Fork National River & Recreation Area. At that point, many of the original structures were destroyed.

Getting there: Take S.R. 297 west from Oneida and through the Big South Fork River gorge. On the west side of the gorge, turn north onto Bandy Creek Road and continue along the road until reaching the Lora Blevins Farmstead.