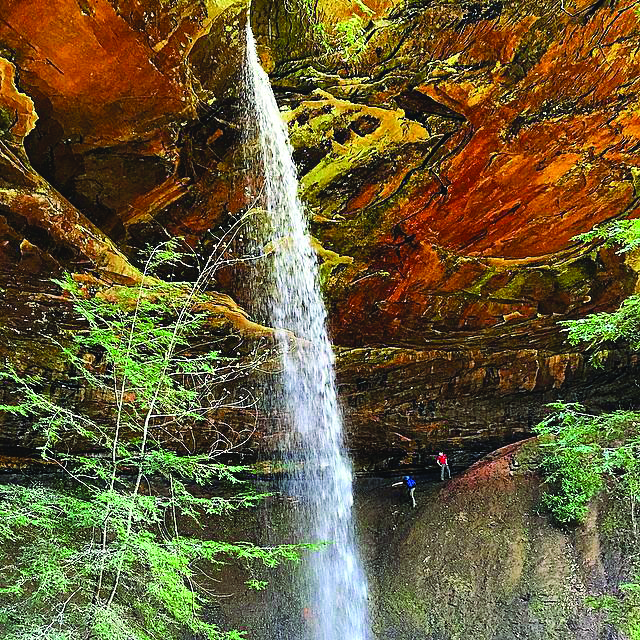 Week 7 of the 10-week 40 Mile Challenge is heading to Divide Road and the western side of the Big South Fork National River & Recreation Area for a visit to Slave Falls.

Slave Falls is one of the tallest waterfalls in the Big South Fork, but it has not been featured on the hiking challenge since the sophomore version of the Twenty Week Hiking Challenge back in 2017, when it was featured on this same weekend: the first weekend of May.

We’re nearing the end of the waterfall season in the Big South Fork, where most of the waterfalls are rainfall-dependent and are reduced to little more than a trickle during the dry season. For now, though, waterfalls are still near their prime, with spring rains continuing to visit the region on a fairly regular basis.

An easy hike: At 3.8 miles in length, the Slave Falls Loop Trail features 150 feet of elevation gain, which are spread out over the entirety of the nearly 4-mile hike. That means there are no major hills to climb, and there are also no major obstacles to overcome. The trail is best hiked by turning right at the beginning of the loop, enjoying the dense hemlock forest and small streams before eventually dropping into the small gorge that encases Mill Creek on the lower side of the waterfall.

A top waterfall: Of the dozens of waterfalls found on-trail in the Big South Fork NRRA, the only one that can really compare to Slave Falls is Yahoo Falls, which is located on the northern end of the BSF and is the tallest waterfall in all of Kentucky. Like Yahoo Falls, Slave Falls has a large rock shelter behind it. The waterfall is formed by a 60-foot drop of Mill Creek, which eventually flows into the headwaters of Station Camp Creek.

Triple feature: The hike to Slave Falls also features a short spur hike to Needle’s Arch, a photogenic rock feature that makes the four-tenths of a mile of added distance well worth the effort. The arch draws its name from the fact that it looks like the eye of a needle that is laying on its side. Later along the trail, hikers will encounter Indian Rock House, which is one of the largest rock shelters in the Big South Fork.

For history lovers: According to oral history, Slave Falls takes its name from the days of slave ownership. The homesteaders and subsistence farmers of the Big South Fork region had a reputation for self-sustaining lifestyles, did not utilize — and could not afford — slaves, and thus were hardly sympathetic towards the American tradition of slavery. Those residents of the region are said to have helped hide runaway slaves inside the large rock shelter behind the waterfall.

Getting there: The Slave Falls Loop begins and ends at Sawmill Trailhead off Divide Road. Take S.R. 297 through the Big South Fork to S.R. 154 in Fentress County. Turn right on S.R. 154 and continue north for approximately two miles to Divide Road. Turn right on Divide Road and, in about a quarter-mile, turn right again onto Fork Ridge Road. Sawmill Trailhead is approximately seven-tenths of a mile along Fork Ridge Road. The total drive time from Oneida is about 35 minutes.

Be careful for: This trail is an easy hike, but there’s a tricky descent over a small rock ledge along the spur trail to the waterfall. And while some hikers choose to ignore the barricade at the waterfall and venture to the base of the falls, the foot path beyond the barricade is steep, slick, and can be treacherous when wet. Not only do hikers risk a fall by ignoring the barricade, but traveling further damages the terrain and sensitive plants. It’s best to heed the signs and stay put at the safe vantage point of the waterfall.

Look for: Earlier in the challenge, on the hike to Kellogg’s Crack at Rugby, we asked you to look for the small painted circles on hemlock trees that signified that they have been treated for the woolly adelgid that is slowly killing untreated hemlocks. As you hike along the early part of the loop trail to Slave Falls, look for the white, cotton-like tufts that cling to the limbs of some of the hemlock trees along the trail. These are the signs of the woolly adelgid, and this is the time of year you find them. You’ll see the same painted marks on the larger, mature hemlocks that you saw at Rugby, because these trees have been painted. But you’ll find the white, cotton-like tufts on the younger, untreated trees, as well as on some of the larger trees that haven’t been recently treated. Take a photo of these infested trees and post it on social media with the #40MileChallenge hashtag to document your hike!

Make it better: Want more? Along the portion of the trail that follows Mill Creek, below Slave Falls, you’ll come across a trail intersection. The connector trail continues to follow Mill Creek until it empties into Middle Creek at Jake’s Place, the homestead of Jake Blevins along the headwaters of Station Camp Creek. Here, it joins the Twin Arches Loop Trail. It’s about 1.6 miles from Slave Falls Loop to Twin Arches Loop, and about another 1.2 miles down Station Camp Creek to Charit Creek Lodge. You would then double-back to return to Slave Falls Loop. So if you wanted to hike to Jake’s Place, it would add about 3.2 miles to your journey, and if you wanted to hike all the way to Charit Creek Lodge, it would add about 5.6 miles to your journey — for a total distance of 5 miles (to Jake’s Place) or 9.4 miles (to Charit Creek Lodge).

Don’t forget to: Leave Only Footprints, Take Only Memories. If you pack it in, be sure to pack it out! 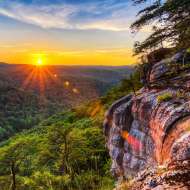